Today, on World Mental Health Day, we confront five common myths and misconceptions in our community that feed into the negative stigma and stereotyping around mental health. While reading these ask yourself:

Mental Health Myth #1: “There’s nothing wrong with you. It’s all in your head.” As discussed above, when it comes to physical trauma and illness, we’re more accepting because we can see the physical signs and symptoms. But when someone has a mental illness and summons the courage to talk to us, we’re quick to dismiss this as, “It’s all in your head” or, “There’s nothing wrong with you.” This could not be further from the truth. Mental illness is real, the struggle is real.

This ignorance is further compounded by the fact that in many developing countries and Eastern cultures, including the Indian subcontinent, mental illness is not recognised as an illness. In some cultures, the term ”mental health’ is a foreign concept and ‘mental illness’ is a made up illness. Being the multicultural country that we are, it’s not uncommon to encounter such cultural perceptions and barriers to care in Australia too. Education and building awareness are critical to shifting these perceptions.

Mental illness is not a figment of someone’s imagination, nor is it a sign of weakness. According to WHO, approximately 3,000 people die of suicide daily globally and it’s the second most leading cause of death in 15-29 year olds. By accepting that mental illness is a real illness we will also help eliminate self-stigma borne from this dangerous thought process. Just like any physical injury or illness, people with mental illness can benefit greatly from support, love, guidance and treatment. According to the Department of Health, when treated appropriately and early, many people make a full recovery. Others may find that their condition recurs throughout life and involves ongoing treatment.  This is no different to how we approach chronic physical health conditions like diabetes or asthma. It shouldn’t be a deterrent to helping someone with mental illness, nor should it feed our prejudice.

As a result of myths like this, many people don’t acknowledge they need care, or that it may help.  In Australia, of the one in five adults who develop a mental illness only 35% seek care from mental health practitioners like psychologists.

Friends and family are critical components in an affected person’s life. Some ways you can help a friend or family member dealing with a mental illness are: While some mental illness symptoms result in withdrawal from society, sometimes people isolate themselves because of myths like this. Public stigma around mental health conditions means that employers are often unwilling to employ people with mental illness. This also gives rise to self-prejudice which prohibits people from applying.

The truth is, people with mental illness can function well in workplaces and lead productive lives. They enjoy the company of their colleagues and don’t display higher rates of absenteeism when compared to people with chronic physical conditions. In fact, with one in five Aussies reported to have a mental illness, chances are many of your work colleagues have a mental disorder. You haven’t noticed because it doesn’t impact on their social skills or work.

According to the Canadian Mental Health Association, when people experience chronic mental illnesses, they learn how to manage their symptoms so they can complete their goals like working, volunteering and contributing to their community. Additionally, studies have shown that people with mental illness have average or above average intelligence. So mental illness does not affect their competency or ability to do the job. The media, movies and television shows sensationalise the behaviour of mentally ill patients, particularly those with very extreme, chronic diagnoses. This highly stigmatised portrayal has fuelled the myth that people with mental illness are violent and dangerous.

In reality, however, most people with mental illness are not violent. In fact, violent behaviour often stems from a past history of violence and criminality not from mental illness. It’s important to correct misleading information like this because it fosters intolerance, which in turn breeds fear to seek care. This fear often stems from being labelled or even ostracised. It’s also worth understanding that people affected by mental illness are 10 times more likely to be victims of violence than be the perpetrators.

Mental Health Myth #5: People with mental illness are born with it

It’s true that some people may inherit a predisposition to some mental illnesses like bipolar disorder and schizophrenia. While this means they have a greater likelihood of developing these disorders, it doesn’t mean they definitely will. Additionally, a family history of mental illness doesn’t necessarily mean you will be diagnosed with one too. In fact, anyone can be diagnosed with a mental health disorder! 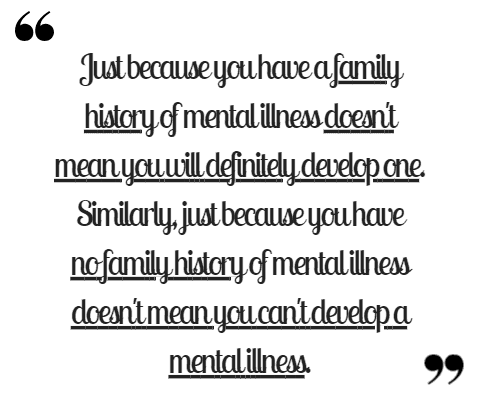 According to the Mayo Clinic, mental health disorders may be caused by a number of genetic and environmental factors such as:

The South Australian government also notes that many factors contribute to the onset of mental illness. These include: stress, bereavement, relationships ending or deteriorating, social isolation, unemployment and more.

Please share this to help our community understand the gravity of mental health stigma. Together, we can be the change one in five Aussies need from their community. 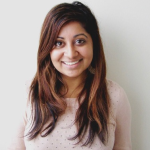